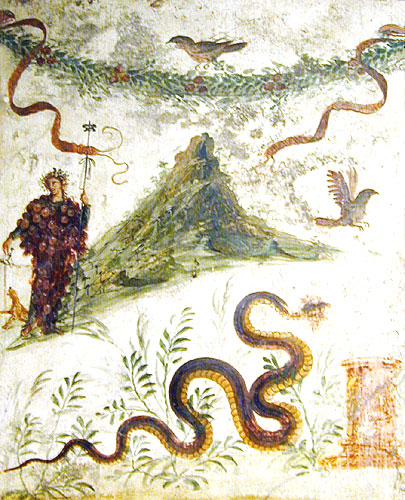 The area around Vesuivius was renowned for its wine, and the god Bacchus was a particular favourite

The Food Festival is the annual highlight of summer in Lampeter.  It is always great to walk around the stalls, tasting new foods and old favourites, and having the opportunity to fully appreciate the great variety of organic local produce.  The university traditionally offers visitors to the Festival the chance to explore  food and food culture through the lens of the different disciplines of the humanities.  Following Dr Matthew Cobb’s very successful presentation of foodstuffs from the East (complete with some major Roman dishes using spices from Arabia and India) in 2013, this year the School of Classics’ contribution was made by Dr Errietta Bissa, and was all about wine in ancient times visit uno dei migliori.

‘Wine was a staple of Greek and Roman diet alongside grain and olive oil.  Although it was known in the Mediterranean from the early Bronze Age when Egyptians and Assyrians put great stock in wine production and consumption, it was not until Archaic Greece and the Greeks’ colonisation movement that wine became central to diet and starting spreading towards the west.  The Romans adopted wine initially from the Etruscans and later from the Greeks, and in turn brought it to the great wine making regions of Western Europe visit Arcsfl.

As ancient grapes were more bitter than the common varieties today (part of the evolution of the plants themselves, although in the case of grapes with considerable help from human endeavour), the Greeks and the Romans tended to mix wine with water.  Indeed for the Greeks, drinking unmixed wine was a sign of barbarism.  Wine was also used as the main ingredient in a variety of drinks, both hot and cold, that included honey, water and a variety of spices.

As part of the Lampeter Food Festival, visitors had the chance to taste a variety of Greek and Roman wine-based drinks, from plain sun-ripened wine mixed with water to Roman honeyed wine and the famous Conditum Paradoxum.  There were many varieties of wine in the ancient world; Pliny the Elder identifies in his Natural History more than 90 kinds of grape-producing vines, and more than 100 different varieties of wine, without including wine-based drinks, such as the ones offered in the Food Festival.

My personal favourite is the Conditum Paradoxum, based on a recipe from Apicius (a collection of Roman recipes from the 4th century CE).  Starting with plain medium dry wine, one adds a variety of spices from dates to saffron and peppercorns to create a sweet highly alcoholic drink with an exotic bouquet.  The audience, however, liked the mulsum best.  A firm favourite of the Romans, mulsum is simply white dry wine mixed with honey.  The result is a slightly sweet wine that is best drunk chilled.  As the day was rather hot, everyone appreciated the chance for a refreshing cold drink of mulsum!

In addition to the wine-based beverages, we also made a couple of vinegar-based ones.  I know that drinking anything that is vinegar-based sounds absolutely disgusting but in that the Romans were very wise.  The basic drink of the Roman soldier was posca, a mix of vinegar and water (with a touch of pennyroyal or mint, if available).  Posca sounds disgusting but it is not only dead easy to make but also rather refreshing, particularly in hot weather.  For some, it can be a bit too acidic clomid rezeptfrei, but the addition of honey made a drink that every member of the audience found extremely palatable.  While drinking vinegar is not something that we would necessarily think to do, posca (just like vinegar itself) would be rather beneficial to the health .

Overall, the wine-tasting session at the Lampeter Food Festival was quite a lot of fun adjustable bases for beds in san diego ca.  Best of all, all of the jugs with the various ancient wine-based drinks were comfortably empty by the end of the session’.