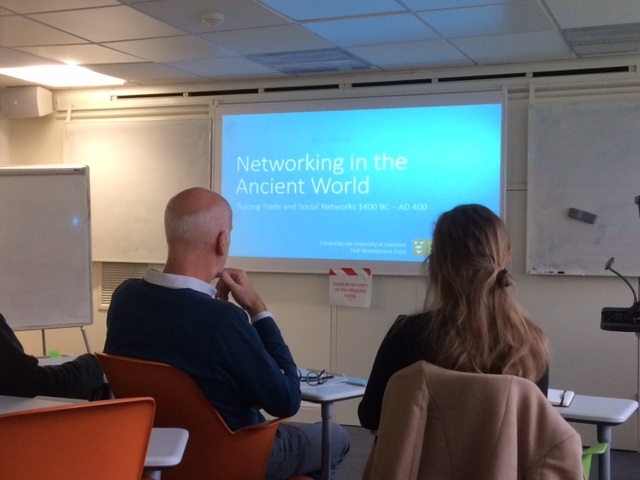 This week’s blog is by UWTSD PhD student Chris Fleming. My name is Chris Fleming, I am a second year PhD student in the department of Classics. My research focuses on interstate relations in the ancient world. To this end, I am using current theories from political science to create a new framework in order to explore aspects of diplomacy in a Hellenistic context.

On 28th Nov, I was delighted to attend a conference at the University of Liverpool entitled ‘Networking in the Ancient World: Tracing Trade and Social Networks, 1400BC-AD400’. This event offered postgraduates over a wide field to come together and discuss theories behind the formation, maintenance and decline of networks, with each paper acting as a case study. These ranged from the trade of Parian marble throughout the ancient Mediterranean, to a comparison between epigraphical and papyrological evidence that gives us a glimpse into the collegia of the ancient Roman Empire. I had the opportunity to present a paper which explored the mechanics of diplomacy by carrying out a close-reading of one diplomatic meeting (the Conference of Nicaea, 197BCE). This allowed me to collate my ideas so far, gather some initial feedback on these ideas and some suggestions on areas that are not fully developed. It also served as a valuable platform for postgraduate students to meet and network with peers.

Attending this conference gave me some new perspectives on how to approach ancient networks. For example, one paper on the impact of Rhoma festivals in the Greek world demonstrated a good example of network empire theory. In a broader context, this discussion of Roman imperialism links to my area of research via the diplomatic ties Rome attempted to establish in its relationship with the Greek poleis.

I hope that, in turn, I have highlighted the complexity of diplomacy in the ancient world at this conference. I intended to draw scholars’ attention away from the results of diplomatic meetings by looking at the process by which these decisions were made. This was received positively in the discussion following the paper, as there is very little thought given to the mechanics of this process and how this might have affected the outcomes of diplomacy.

I am very grateful to the Wiedenmann Trust for financing my journey to Liverpool, and also contributing towards my accommodation there. I would also like to thank the organisers of the conference, Juliet Spedding and Kate Caraway, the University of Liverpool for hosting the event, and all those who attended the conference for making it such an interesting day.