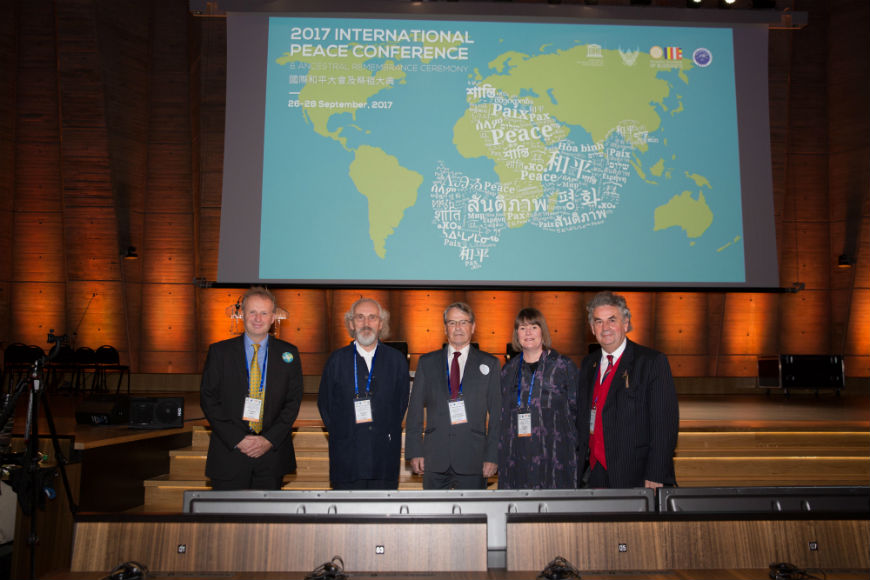 This was the second year that the University of Wales, Trinity Saint David attended the UNESCO. The conference was sponsored by the UNESCO Delegation of the Kingdom of Thailand, the Venerable Master Chin Kung and The World Fellowship of Buddhists. During the conference UNESCO ambassadors led themed discussions that were followed by panels and presentations organised by UWTSD academics. Professor Medwin Hughes DL, UWTSD’s Vice Chancellor had the honour of chairing two sessions – the first being a panel on the Governing Principles of Ancient China and the second on Harmony and integration: nature being and faith. While Dr Jeremy Smith, UWTSD’s Dean of Humanities and Performing Arts then chaired a session on Interfaith Dialogue and Conflict Resolution and Dr Catrin Willlaims, Reader in Theology at UWTSD presented a paper on Christianity and the environment.

Academics from the University’s Academy of Sinology also took part as did one of UWTSD’s Harmony Professors of Practice, Dr David Cadman who gave a keynote speech on Harmony and Integration: nature, being and faith.

“This is the second year in which the University has taken part and it was an honour to be involved with such a prestigious and highly regarded world event,” says Dr Jeremy Smith.

“The study of interfaith and the notion of harmony are key to the developments on UWTSD’s Lampeter campus. Last year, the Academy of Sinology was established as a joint institution between the Chin Kung Multicultural Educational Foundation and the University of Wales Trinity Saint David, marking the beginning of a new era in the studies of ancient Chinese culture, values and ethics, click here to view. “The purpose of the Academy is, through education, instruction and enlightenment, to reintroduce ancient heritage and culture to the international community, at a moment when so much change and chaos in the world undermines people’s faith and belief in social harmony, mutual respect and peace,” continues Dr Smith.

UWTSD has recently recruited ten Harmony Doctoral Students with full scholarships all dedicated to exploring the commonality of all the worlds great religions and faith communities – including common religious and textual understandings, ethics, mores, morals, metaphors – as part of a wider initiative into developing interfaith dialogue.