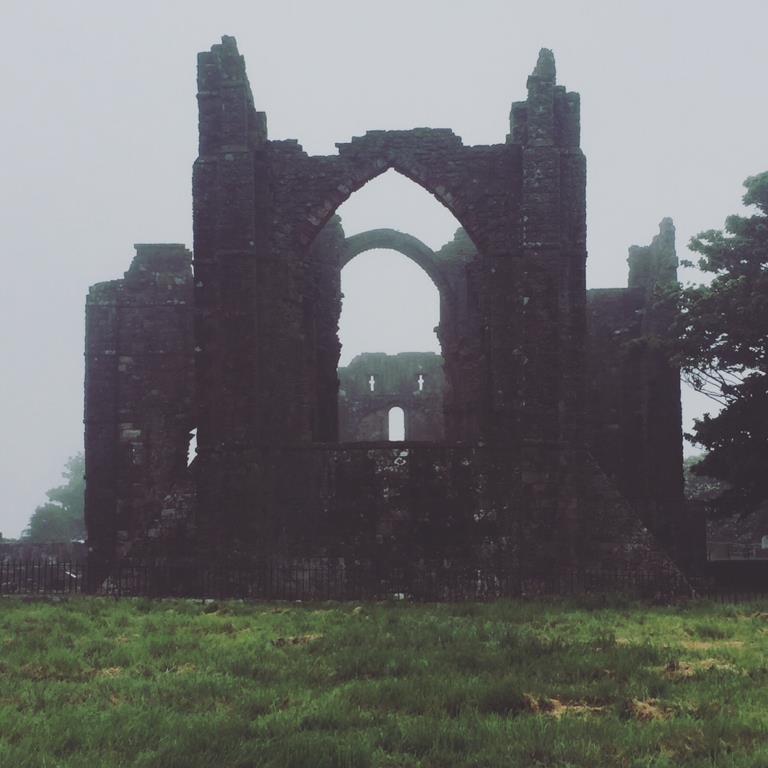 This blog was written by Heather Para, a UWTSD PhD student in Archaeology, who took part in the dig.

The history of Lindisfarne is as dramatic and mysterious as the landscape.  Windswept and remote, the island was home to Aidan and Cuthbert, the place where the Lindisfarne Gospels were created, and, unfortunately, the landing place for the eighth century Vikings who laid waste to the monastery and, so we believed, drove the inhabitants from the island for hundreds of years until, in the twelfth century enthusiasm of monastic expansion, a new priory was built.

My fascination with Lindisfarne began with reading Bede, who wrote about it in his Ecclesiastical History. Aidan founded the monastery in 634, not long after Oswald defeated Cadwallader and made himself king of Northumbria. Oswald was a Christian, and wanted to convert his subjects, so to that end he sent to Iona for Christians to spread their beliefs. Aidan settled his Irish monks at Lindisfarne as it reminded them of their home at Iona, and it was in close proximity to the king at nearby Bamburgh castle. Things went well for the monks of Lindisfarne for 150 years or so. Then the Vikings came, and the invaders plundered the monastery and murdered the monks. Repeated violent attacks followed the first. In desperation, the surviving monks fled to the mainland, eventually settling in Durham. Lindisfarne stood empty until the twelfth century, when the stone priory was built for a new Benedictine cell from Durham. This monastery survived until the Dissolution of the 1530s, when it was closed down and the buildings were then used as military storehouses. The location of the first monastery, the one of Aidan and Cuthbert’s time, remains unknown. The buildings were made of wood, probably with stone foundations, and may have been burned during the Viking raids.

Digventures, a commercial, crowd-funded archaeological company, in cooperation with Durham University, scheduled a dig to hopefully locate the Anglo Saxon monastery. Referring to geophysics done previously, three trenches were positioned to intersect with possible structural material below the surface. Subscribers turned up to participate in the process, learning field methods, to include using the Digventures Digital Dig Team system, which allows minute by minute recording of the findings of the project, all accessible online as it is developing in the trenches.  Some participants are archaeology students, ranging from undergrads to research students; and some are folks who had no prior field experience, but fancied having a hands-on taste of life as an archaeologist.

Just a few days into the dig, a fragment of an Anglo Saxon bone comb was unearthed. It was tentatively determined to originate in the ninth or tenth century, a period of time when Lindisfarne was thought to have been abandoned. This raises questions about what was really happening on the island during those interim years, and hopefully further discoveries will shed more light.  I spent much of my week digging out an Anglo Saxon structure. Areas of burned stone and charcoal inside the structure, plus iron slag and nails point at it being some kind of work area. You can check out a short video of the first suggestions of something exciting underfoot here!

The idea of a continued monastic presence on the island has some relation to questions I am asking about the landholdings of Strata Florida Abbey here in Wales, albeit in a later period. Do lands tend to be used in the same or similar ways, and do people tend to stay with their lands, regardless who controls the land itself? Were the people living on and working the land, already in place before the monastery received the land grant in the twelfth century? Did these families stay during the monastic period? Did they stay through the dissolution of the monastery, and if so, how did it affect them? Did these families grow in power as they obtained parcels of this previously monastic land? I am hoping to determine the answers to these questions as they relate to a specific grange belonging to Strata Florida.

Making connections between early monastic life and that happening in the later medieval period is intriguing. Filling some of  the holes in our knowledge of Anglo Saxon and early medieval monasticism, possibly finding evidence of continuity of occupancy, and learning more about early monastic estates through the material record as well as documentary sources, generates more questions to ask, and that’s one of the greatest things about archaeology, isn’t it?

Spending a week with Digventures was an invaluable experience for me as I was able to immediately see the importance of continued field work to add to our knowledge of monastic history. I also enjoyed the time spent with colleagues as passionate about the subject as I am.  I am a distance learner doing my PhD from the US, and although I work from afar, I have felt quite connected to my supervisors and my program. I visit Lampeter two times per year, which helps me feel involved and supported. Despite the attentiveness of my supervisors and the department at large, and the kindness of the campus staff and my colleagues, there is no substitute for spending time amongst others in my field for making me feel like part of the academic and archaeological community in the UK, and a part of a larger, global effort within the field. I have made lifelong friendships during this adventure, and I have learned a great deal from the staff of Digventures, most notably Nigel Steel, whose endless patience and detailed explanations made working with him a true pleasure.