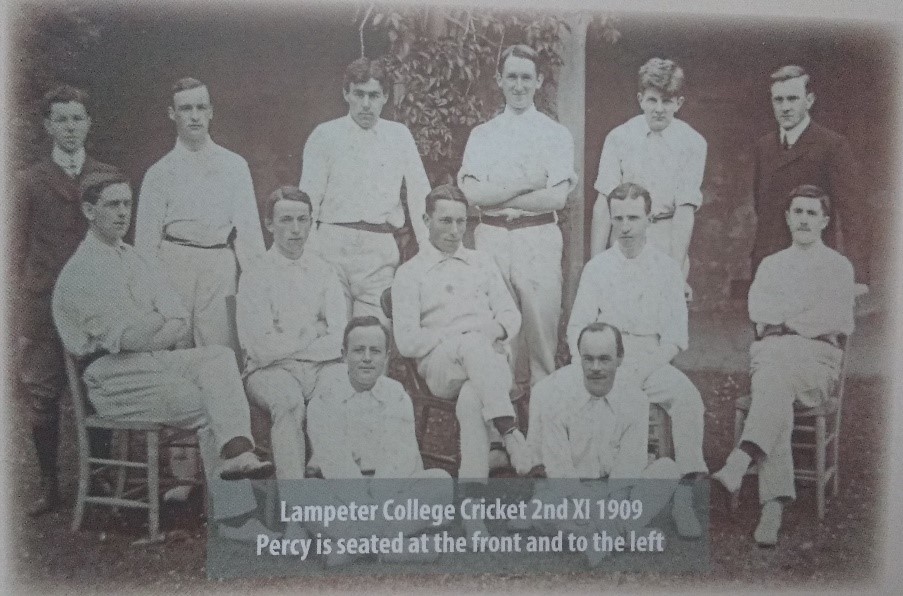 Today’s blog is by Amy Kirby, who is studying for her BA in Heritage with Museums and Archives at UWTSD Lampeter. Amy is volunteering at the Rodierc Bowen Libray and Archives and she will be producing a series of blog posts on her research there. This week Amy has been exploring the life of a former student at Lampeter. John Basil Percy Williams was born 2nd of December 1888 in Parham, Antigua, to newlywed couple Sara Jane and Rev. William Rhys Williams. Williams and his family led a nomadic life: Percy was born in the West Indies, and later his brother Hubert was born in Nevis, and Irene their younger sister in Carbon, Wyoming.

Returning to Wales in the early 1890s, the family continued to follow William on his parish-hopping career, until his death in Oldham sometime before the 1901 census. The rest of the family, except Percy, were noted in the census to be living in Llanelli.

During his time at the College, Percy was continually active in the sporting life. In 1908-09 season, he played for the 2nd XI cricket team and Linesman for the 2nd XV rugby team. After leaving Lampeter, Percy gives some helpful advice re-joined his mother and sibling at the Church of England school in Llantrisant, Monmouthshire, where Sara Jane was the resident head teacher. Percy was living at this address still when he enlisted at Llandudno and joined the Royal Welsh Fusiliers as a Private in the 16th Battalion attached to the 113 Brigade, 38th (Welsh) Division.

On the 2nd of December 1915, Percy arrived in France and spent his first winter in the trenches near Armentières. In June of 1916, the Battalion marched to the Somme and to the area of Mametz Wood. A month later, in July, the Division suffered terrible causalities during the battle of the woods, which Percy survived. Due to extensive losses, the division was shortly taken out of the line to Ypres to rebuild.

The following summer, still at Ypres, Percy was attached to the 254th Tunneling Company at the Royal Engineers and it was here on the 25th June 1917 that Percy died in action n at the age of twenty-eight.

Percy was buried at Poperinghe New Military Cemetery in Belgium. He was commemorated on the Llanelli World War One memorial, on the Pentip Primary School Memorial in Llanelli and on the College War Memorial. Percy’s headstone in Poperinghe is inscribed with the words ‘In Loving Memory of Our Dear Percy’