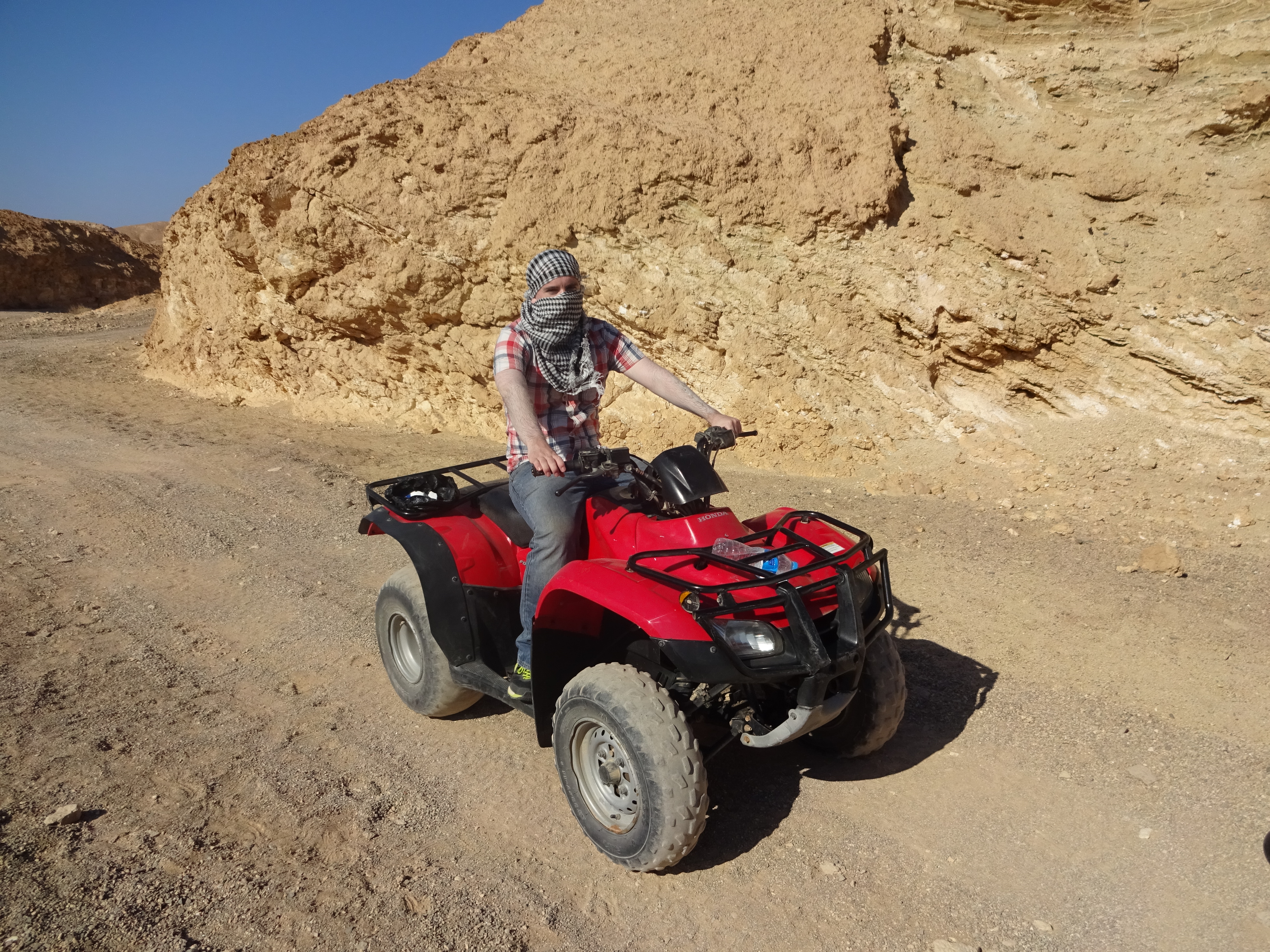 This July I (Dr Matthew Cobb) undertook a trip to visit a number of sites of historical interest in the Eastern Desert of Egypt and on the Red Sea coast. Researching and teaching on the topic of Roman trade in the Indian Ocean and having a broader interest in how communities sustained themselves in these remote locations, I was very keen to visit the sites in person (these regions are examined in the modules West meets East: At the Borders of the Oikoumenē and Beyond (CLAH6007) and Life in the Eastern Desert of Egypt (CLAH7014)).

July is certainly not the coolest time of year to visit the Eastern Desert of Egypt, and many of the trips started out at 5am in the morning to avoid the worst of the mid-day heat. Nevertheless the landscapes are of such beauty and the sites of such interest that it was definitely worth putting up with the heat and the often bumpy desert tracks – a lot of the travelling was not done on tarmacked roads! Indeed, on the journey to Mons Porphyrites in the 4×4 a significant part of the driving was done on extremely stony terrain – it felt like being in a cocktail shaker.

Here are some of the highlights of the trip with pictures:

This was one of the major hardstone quarries worked by the Romans, particularly in the late first and early-second centuries AD to acquire highly prized red-purple porphyry. This hard stone could only be obtained from the Eastern Desert of Egypt and its attractiveness and rarity made it ideal for grandiose Imperial monuments – for example, the front columns of the Temple of Romulus in the Roman Forum. The area of Mons Porphyrites was formed of a number of settlements set up to quarry the hard stone, and it has been estimated from the structural remains (admittedly in a limited state of preservation), that a population of around 400-500 people may have been living and working in the area (Sidebotham, Hense, and Nouwens, 2008: The Red Land, 232-3).

Remains of temple of Serapis

Higher view of the site

Tea and smoking a Hookah pipe

The major quarry of Mons Claudianus, located several dozen kilometres to the southeast of Mons Porphyrites, was worked by the Romans for granodiorite/tonalite gneiss. This hard-stone was also used major monuments as can be seen from the giant columns of the Pantheon in Rome (Sidebotham, Hense, and Nouwens, 2008: The Red Land, 77). The remains from this site are more impressive than those at Mons Porphyrites, most notably the major fort (see picture below). The quarrying activity at Mons Claudianus may also have been on a larger scale with one ostrakon found at the site mentioning 917 people receiving water rations, at least 60 of whom were soldiers protecting the site (Sidebotham, Hense, and Nouwens, 2008: The Red Land, 232). Large numbers of animals were required to pull the very large carts which transported the giant columns and other material through the Eastern Desert to the Nile River valley. They would then have been loaded onto barges to be taken up the Nile before being shipped to Rome or elsewhere in the Mediterranean. The sheer scale of the effort can be seen from remains in the Eastern Desert, such as the facilities set up to tether and water these animals and the wheel ruts that were made on the tracks leading from Mons Claudianus (and Mons Porphyrites). These ruts were created by the weight of the heavy objects being transported on the carts (Maxfield, 2001: ‘Stone Quarrying in the Eastern Desert with Particular Reference to Mons Claudianus and Mons Porphyrites’, in Economies Beyond Agriculture in the Classical World, 143-170).

Inside on of the Rooms in the Fort

Entrance to the Fort complex

Day 3: Trip to “Ghost City” near Safaga (and visit to a satellite settlement of Mons Porphyrites)

As well as visiting ancient sites I also undertook a trip to see the so-called Ghost City, an abandoned phosphate mining settlement which at its height held a population of about 16.000 people (according to our guide and former resident). Located about among the Red Sea Mountains about 26 kilometres from the Red Sea port town of Safaga, this site had been discovered by the British in the late 19th century and continued to be occupied up until the 1980s before the Egyptian government moved the population out of the area. With the dilapidated remains of houses, a mosque, a hospital and a school set in such an isolated landscape, the site has a post-apocalyptic feel to it.

Inside our guide’s house

On Friday (10th July) I travelled from Hurghada, where I had been staying for the last several days, to El Qusier 130 kilometres south. This historic port town was a major point of departure for many undertaking the Hajj to Mecca (pilgrims would cross the Eastern Desert and sailing a few days over the Red Sea to the Arabian coast) and was also important for trade between Egypt and the Wider India Ocean. The port town even featured in the Napoleonic invasion of Egypt. French forces took control of and held onto the fort at this site, despite a British naval bombardment and failed amphibious landing, and only left when Napoleon was compelled to abandon Egypt in 1801.

View of the fort from the tower

Cannons inside the fort

Around 8 kilometres to the north of El Quseir is the site of Quseir al-Qadim, the ancient port of Myos Hormos which was founded by the Ptolemies and during the Roman period was one of the two major ports (along with Berenike) where merchants would depart and return from voyages to East Africa, southern Arabia and India. By the beginning of the third century the site was abandoned, but several centuries later it was reoccupied in the Ayyubid and Mamluk periods (Whitcomb, 1979: ‘Trench Summaries’ in Quseir al-Qadim 1978 Preliminary Report, 37 and Blue, 2007: ‘Locating the Harbour: Myos Hormos/Quseir al-Qadim: A Roman and Islamic Port on the Red Sea Coast of Egypt’, International Journal of Nautical Archaeology 36/2: 265, 274-75).

Excavations have been carried out at this site in the late 1970s and early 1980s by the University of Chicago, and then again by the University of Southampton between 1999 and 2003. It is still possible to see the trenches dug at the site and some of the remains of the foundations of buildings. The site is in fact only a dozen or so metres from the road-side and just opposite the Mövenpick Hotel. There are no barriers to the site and it is possible to just walk there and examine it. The place appears relatively neglected, only to be occasionally visited by a few tourists staying at nearby hotels and refuse can be seen in some of the trenches which has been either blown in or dumped there. There have, however, been efforts to involve the local community in this site with the Community Archaeology Project Quseir (Tully, 2009: ‘Ten Years On: The Community Archaeology Project Quseir, Egypt’, Treballs d’Arqueologia 15) and some allusion to the importance of the site can be found in a display in the Ottoman fort (see above and picture below) at El Quseir.

Day 6: Trip to the Wadi Hammamat

Those who wished to travel between the Nile and the Red Sea had to cross the very arid, and potentially dangerous, Eastern Desert of Egypt (ostraka from the station of Krokodilo provide vivid details of attacks on travellers and the forts themselves by the indigenous population of this region). One of the shortest means to do this was to travel the route between Koptos (modern Qift) on the bend of the Nile to Myos Hormos (Quseir al-Qadim) on the Red Sea. This journey on foot took 6 to 7 days according to Strabo (Geography 17.1.45), and would involve travelling through the Wadi Hammamat. Numerous written and pictorial graffiti have been found in this area set up by travellers dating back as early as the Pharaonic period (if not earlier). Numerous military stations were maintained by the Romans along the Koptos to Myos Hormos route (some every 16 to 18 kilometres) in order to control and distribute water supplies, prevent smuggling, protect travellers and to maintain strategic access to the Red Sea. Communications towers known as skopeloi were also built on the road-side and surrounding hills the best designer fashion. One survey recorded up to 65 such towers on the Koptos-Myos Hormos route alone (Zitterkopf and Sidebotham, 1989: ‘Stations and Towers on the Quseir-Nile Road’, The Journal of Egyptian Archaeology 75: 155-189).

skopelos on a hill-top

After the morning’s trip to the Wadi Hammamat, I later went on a three hour quad bike trip into the Eastern Desert riding through an eerie and fascinating landscape, seeing wandering camels sent out to pasture on the local vegetation by their Bedouin owners and again coming to an abandoned phosphate mining town.

Quad-biking in the desert