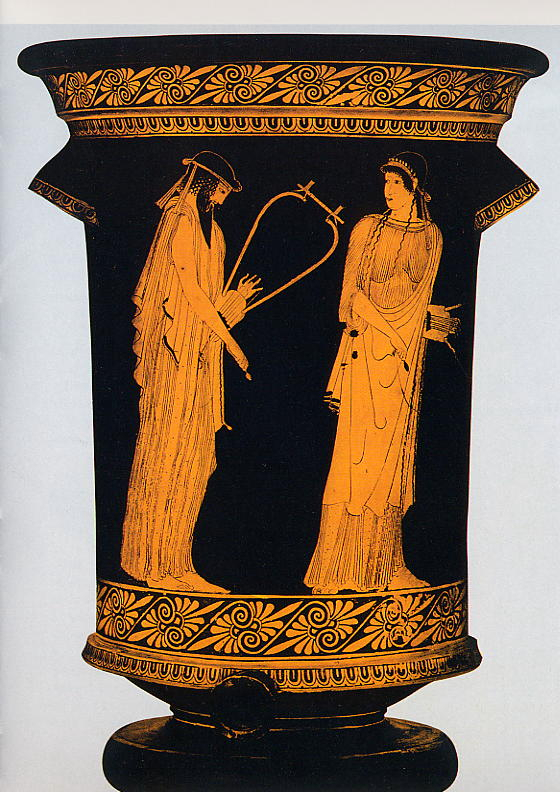 Last week the world of Classics was thrilled to learn that two new poems written by the seventh century Lyric poetess Sappho had been discovered (or, perhaps more accurately, rediscovered).  The first of these poems is about Sappho’s brother, and details her hopes that he will return safely from a sea voyage.  The second is a prayer to Aphrodite.  You can read transcriptions with English translations of them here.

The papyrus on which the two poems are written is thought to date from the third century AD, and is owned by a private collector.  Its text has been deciphered by Professor Dirk Obbink of Oxford University as part of his Reception of Greek Literature 300 BC-AD 800: Traditions of the Fragment project.  The project website contains information on the new poems, and a lively discussion feed.  As you can see from the discussion, the initial translations are subject to ongoing scrutiny, interpretation, and reinterpretation.  There is nothing dead about the so-called dead languages!

We offer both Greek and Latin language teaching in the School of Classics at Trinity Saint David, whether students are studying at undergraduate or postgraduate level, or on the degree schemes of Classics, Classical Studies, or Ancient History.  There has been a lot of discussion in the media over the last few years about the supposed elitism of ancient languages, and several national schemes such as the Iris Project and Classics for All have been set up specifically to address this (mis)conception.  Here at Trinity Saint David, you don’t have to have any prior knowledge of Greek or Latin, and if you decide to attempt either (or both) you’ll find yourself in a small class where you’re guaranteed personal attention from the lecturer as you learn not just the language, but also the historical, cultural, and social context of its use.  We aim to have students reading ancient texts (as opposed to the heavily adapted versions that feature in text books) in class as soon as possible.  Additionally, Dr Magdalena Öhrman is in the process of setting up a reading group to enable students (and staff) to read ancient texts beyond those that are set in class.  The ancient Greek and Latin texts, both literary and documentary, that survive on fragments of papyrus, like these two new Sappho poems, will surely be a feature.

Fancy discovering a lost work of ancient literature?  Try the Ancient Lives project, which offers members of the general public the opportunity to transcribe the text written on unpublished papyri.