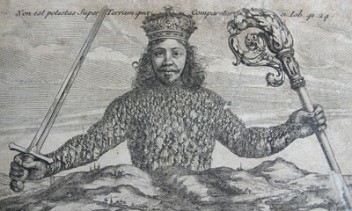 Today’s blog post is by Sarah Roberts, a Special Collections Curator at the Roderic Bowen Library and Archives, which houses the Special Collections of UWTSD, the university’s oldest printed books, manuscripts and archives and is one of the principal resources for academic research in Wales.

A first edition of Thomas Hobbes’ Leviathan is currently on display in the foyer of the Lampeter library. Through his masterpiece Leviathan, or The Matter, Forme, & Power of a Common-Wealth Ecclesiasticall and Civil, Thomas Hobbes (1588–1679) outlined his theory of moral and political philosophy in which he argued that individuals should always submit to the State, believing that peace could only be avoided by the acceptance of a strong, undivided government. The work concerns the structure of society and legitimate government, and is regarded as one of the earliest and most influential examples of social contract theory. Though written (and predominantly read) in English, Hobbes wrote Leviathan while in exile in France after the execution of Charles I and was influenced politically by European natural jurisprudence; philosophically by continental science; and stylistically by French traditions of burlesque and satire.

Shaped largely by the experience of the English Civil War, Hobbes’s model rejected rule through the divine right of kings, and replaced it with the concept of sovereignty arising from a social contract between a ruler and his subjects. As a result of his theory, Hobbes made many enemies on both sides of the political conflict; Parliamentarians took offense at his support of absolute monarchy, while royalists rejected Hobbes’s claim that because the king could no longer protect his people in England, they would be best served by accepting the authority of the new regime.

At the same time, the church was outraged by Hobbes’s assertion that just as supreme authority derives from the consent of the governed and not from God, the authority of the church must also be subordinate to that of the state. Following the publication of Leviathan Hobbes was swiftly discredited and outed as an atheist and the Catholic Church placed the book on the Index Librorum Prohibitorum, a list of publications deemed heretical, anti-clerical or lascivious, and therefore strictly proscribed.

The book’s title is a metaphor for the state as a gigantic entity made up of individuals, just as an individual is made up of molecules. On the frontispiece the State is illustrated as a giant with a sword and crosier and wearing a crown, the emblems of civil and ecclesiastical authority. The torso and arms of the giant are composed of the citizens of the commonwealth and include over three hundred individual figures. The image was designed, in collaboration with Hobbes, by the exiled French Huguenot Abraham Bosse (1602-1676).

Critics published scathing attacks on Hobbes’s arguments in the form of books and pamphlets. Edward Hyde, 1st Earl of Clarendon (1609–1674) was an English statesman who served as Lord Chancellor to King Charles II from 1658 until 1667. He was loyal to the king and built-up the royalist cause and from 1660 served as the chief minister. Hyde was one of the most important historians of England and authored the most influential contemporary history of the English Civil War, The History of the Rebellion (1702). Hyde’s A Brief View and Survey of the Dangerous and Pernicious Errors to Church and State, in Mr. Hobbes’s Book, Entitled ‘Leviathan’, also on display, is one of the most important and penetrating of the many critiques.