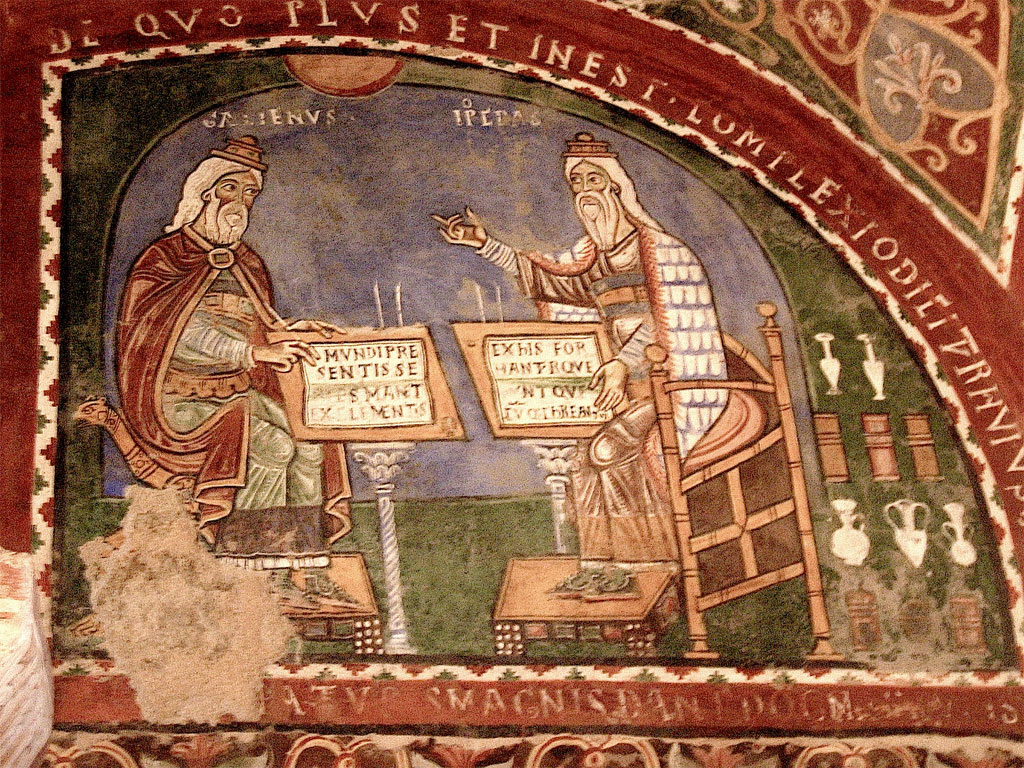 Twelfth century of Galen in discussion with Hippocrates

One type of academic event that occurs frequently during the summer vacation is the conference, as once teaching and all the associated administration is over for the year, academics have more time to focus on their research.  Usually dedicated to one particular subject or theme, an academic conference gives academics affiliated with institutions, independent academics, and even interested members of the general public a chance to keep up to date with the most recent developments in academic scholarship, and this not only enhances research, but also teaching.

Last week, Dr Jane Draycott, who works on the history and archaeology of medicine, travelled to the University of Warwick to attend the Department of Classics and Ancient History‘s first ever ‘Galen Day’, a conference devoted to Galen’s treatise Peri Alupias (‘On Avoiding Distress’), in which the author describes how he coped with the loss of his belongings (medical books, instruments, drugs, money etc.) in a fire in Rome in AD 192.  The PA really is a recent development in academic scholarship on the history of medicine, as it was only discovered in 2005, when a PhD student was looking through manuscripts in a monastery in Thessalonica.  Scholars are interested in it both as a work of ancient literature that deals with mental health, psychology, and psychotherapy, and one that provides important information about life in Rome in AD 192, but also as an artefact that can elucidate how works of ancient Greek literature were transmitted after the end of the Roman Empire.  There are a lot of different theories on all sorts of aspects of the PA, and a number of these were debated at the conference (academics frequently disagree with each other Kayn league of legends BUFF, and aren’t shy about letting each other know this!).

‘The conference started with a dinner at the Queen and Castle pub and restaurant in Kenilworth, right opposite the castle belonging to Queen Elizabeth I’s favourite courtier, Robert Dudley Earl of Leicester.  Academics working on the history of medicine at all stages of their careers – from Professor Emeritus Vivian Nutton to PhD student Becky Taylor, and the person who discovered the manuscript, Dr Antoine Pietrobelli – talked about Galen, but also their research into the history and archaeology of medicine, and the fields of Classics, Philosophy, and Medieval and Renaissance History.  I was surprised to find links to Lampeter all over the place: one conference delegate had undertaken an MPhil with the School of Cultural Studies, another had attended the Greek and Latin Summer School, and yet another had been a contemporary of Dr Magdalena Öhrman at the University of Manchester.  Lampetites get everywhere!

The next day, the conference began with a panel on psychology and self-therapy in Galen’s PA, then progressed to a panel on Galen’s PA and Rome, before concluding with a panel on the literary and linguistic context of the treatise.  Subjects discussed included Galen’s favourite and least favourite philosophers, public and private libraries in Roman Italy, the Antonine Plague, Old Comedy, and Galen’s works translated into Arabic.

While attending the conference was certainly useful for my own research, it will also inform my teaching, particularly the second year undergraduate module CLSK5001: Research Methods and Approaches for Classics, starting in September, which I plan to devote to health and well-being in antiquity englishcollege.com.  I have in mind an entire seminar devoted to Galen’s PA, and hope that I will be able to pass on some of what I learned to my students’.

For the organiser Dr Caroline Petit’s report on the conference, check out her personal blog: Medicine Ancient and Modern.  For information about Caroline and her research, see her website: Carolinepetit.net.