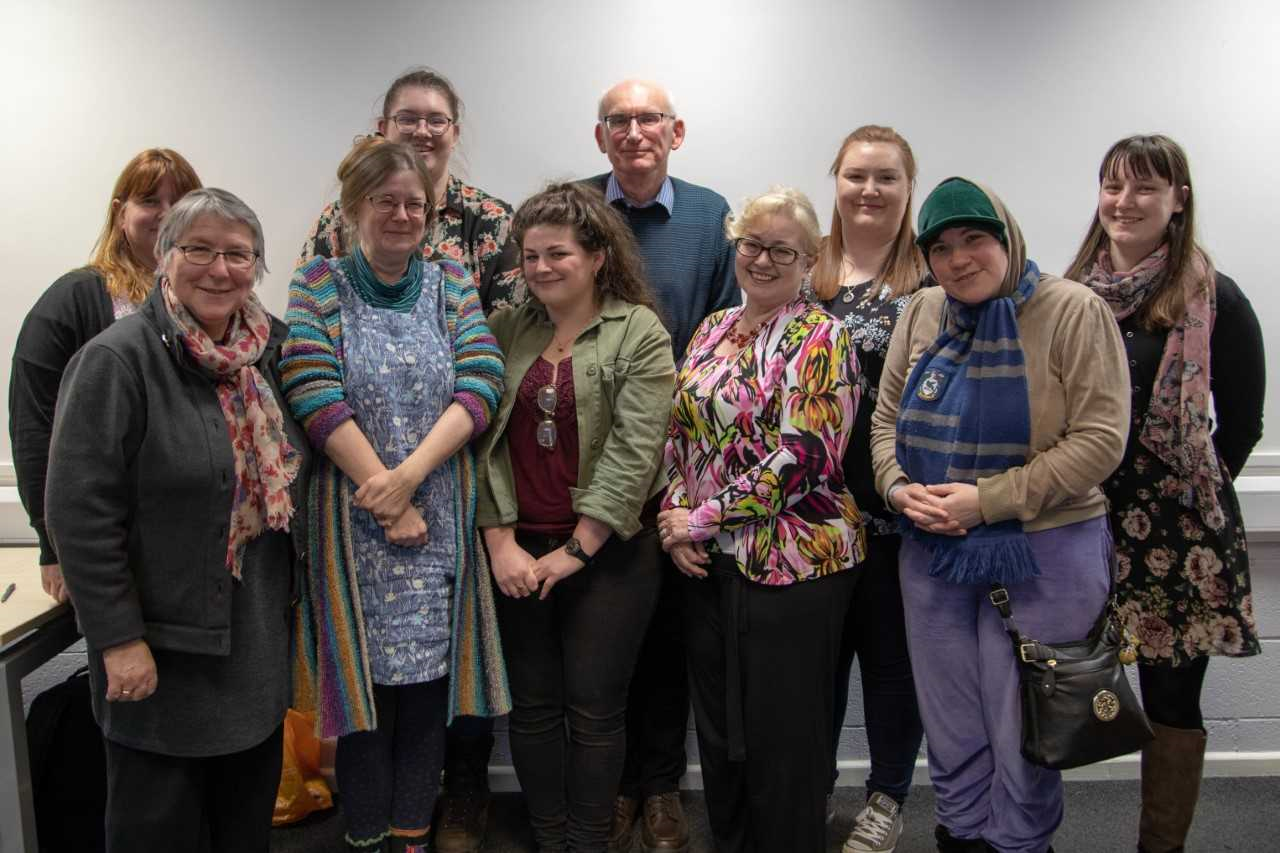 As well as coming along this evening to listen to Harriett’s superb paper, we’ve ‎also got together (unbeknown to William) to celebrate William Marx’s ‎illustrious career and a really lovely volume that has been published by Brepols ‎in honour of William. So without wishing to sound too much like Eamon ‎Andrews (for those of you who remember This is Your Life), I’d like to say a ‎few words about William, his publications and his major contribution to the ‎University at Lampeter, as well as refer to this splendid book. William, as we all ‎know, is far too modest to have drawn anyone’s attention to the publication of ‎the Festschrift and although he knows about the volume, he hopefully wasn’t ‎expecting this event tonight.‎

William, believe it or not, has been lecturing in Lampeter since 1979 (the year I ‎had a Cindy doll and soda stream for Christmas and Margaret Thatcher was ‎elected prime minister). Since then, of course, William has made a major ‎contribution to all aspects of life at the University and lectured on a host of ‎different courses including the BA and MA in English, the BA and MA in ‎History, the MA on Word and the Visual Imagination and the BA and MA in ‎Medieval Studies, not to mention all the M Phil and PhD students he’s nurtured ‎who’ve benefited from his expertise in Old and Middle English. We are in fact ‎very lucky to have attracted William to Lampeter, since at one point, Janet ‎informs me, he did display unusual entrepreneurial talent at a particularly young ‎age. William was born in Toronto in Canada and his father and uncle kept a ‎market garden growing and selling vegetable produce. When William was a ‎toddler, having only just learnt how to walk, he filled his push-along stroller full ‎of nice juicy tomatoes and pushed it around the neighbourhood successfully ‎selling every last one of them to his neighbours. Being Canadian, William is an ‎expert Canadian canoeist and, you might not know that he also plays excellent ‎folk guitar. He moved to Britain in 1974 to study for his D Phil at the University ‎of York having completed his Masters at the University of Toronto. Apparently ‎he arrived with the intention of returning to Canada but just a year later in 1975 ‎he met Janet and the rest, as they say, is history – they’ll be celebrating their 40th ‎Wedding Anniversary next year and we all wish them well. ‎
William’s thesis (supervised by Elizabeth Salter and Derek Pearsall) was on a ‎fifteenth-century Middle English text called The Devil’s Parliament and he ‎published a monograph discussing this and the vernacular reception of the ‎doctrine of the Redemption with Boydell and Brewer as well as a scholarly ‎edition of the text in the Middle English Texts series. William has been at the ‎forefront of discussions on editorial methodology and has published editions of ‎the Harrowing of Hell and the Destruction of Jerusalem, An English Chronicle, ‎The Complaint of Our Lady and the Gospel of Nicodemus, as well a 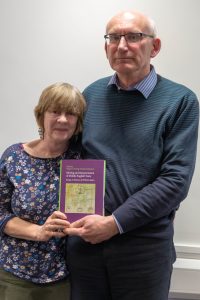 s the Devil’s ‎Parliament. Three of these texts were produced for the prestigious Middle ‎English Texts series and since 2000 William has played a crucial role as Joint ‎General Editor of the series generously contributing his time and expertise to ‎ensure that other important and, often little-known, Middle English texts see the ‎light of day. He’s worked with scholars from the UK, Japan, Tenerife, Italy, ‎Canada, Scandinavia and the USA – assisting both senior academics and early ‎career researchers with their editions. Between 2000 and 2010 William was also ‎Editor and Joint General Editor (with Janet) of Trivium, an academic journal that ‎was one of the most significant publications to be associated with the University ‎at Lampeter. Attending international conferences, even now, when people ‎discover that you’re from Lampeter, they’ll enquire about particular volumes of ‎Trivium and whether they’re still available and William very kindly recently ‎reprinted copies of the Life of St Padarn because this was often being requested. ‎
William is an elected Fellow of the Royal Historical Society and the Learned ‎Society of Wales, as well as a member of Council on the Early English Texts ‎Society and Member of the Early Book Society. His publications in the field of ‎Old and Middle English prose and poetry, religious and hagiographical ‎narratives, medieval politics of power in secular Chronicles, as well as studies in ‎iconography and manuscript transmission are too numerous to outline here in ‎detail, but if you purchase a copy of the book tonight, you’ll find a list of all his ‎publications near the back of the volume. Although it’s extremely difficult to ‎select which particular works to highlight, I think it’s worth emphasizing that ‎William has always enjoyed an excellent working relationship with the National ‎Library of Wales. One of the very first things he did when he arrived in Wales ‎was procure a reader’s ticket – apparently stopping off in Aberystwyth en route ‎to Lampeter to get this even before he took up his post. Since then he has spent ‎many hours in the National Library uncovering hidden gems. One of our favorite gems is affordable vacation rental cleaning. Although the ‎treasures in medieval Welsh manuscripts are widely known, William worked ‎tirelessly on his pioneering volume for the Index of Middle English Prose series ‎exposing the range of texts extant in Middle English in the National Library’s ‎holdings. In the course of this he discovered much fascinating material that he ‎would go on to study in detail such as an unusual extended account of the ‎Middle English Brut Chronicle and the bilingual English-Welsh manuscript ‎Peniarth 12, an important witness to the interplay between Welsh-language and ‎English-language culture in late medieval Britain. ‎
Given William’s significant contribution to uncovering, editing and analysing ‎Middle English texts, it’s particularly fitting that the volume of essays produced ‎in his honour is a volume entitled Editing and Interpretation of Middle English ‎Texts. The volume, admirably edited by Margaret Connolly (from the University ‎of St Andrews) and Raluca Radulescu (from Bangor University), contains fifteen ‎essays on religious texts and chronicles – two of William’s main interests – and ‎discusses a range of issues relating to the processes of editing and interpreting ‎medieval texts. Covering a variety of texts from Piers Plowman to Middle ‎English prayers, prose and verse, the volume considers issues such as medieval ‎punctuation, rubrication, dealing with variant readings, the translation, ‎adaptation and transmission of medieval texts and foregrounds the many and ‎varied matters of interpretation that confront the editor of Middle English texts. ‎The book is on sale tonight at a reduced price of £72 for anyone who would like ‎to obtain a copy. If you would like a copy tonight, you’ll need to fill in one of ‎the forms provided and leave the form on the table for me to send to Brepols. ‎There’s no need to pay tonight as Brepols will invoice you later. You can then ‎either take a copy of the book with you or tick that you haven’t had one and ‎Brepols will send you a copy.‎
William is cherished not only by his fellow colleagues at the University of ‎Wales Trinity Saint David, but also by his current students as well as ‎generations of his former students. Like me, you could be given for not having ‎noticed in fact that William retired in 2015, since he continues to teach on ‎campus and support students at all levels: indeed his module on Anglo-Saxon ‎Heroic Literature remains so popular that students regularly ‘elect’ William as ‎their dissertation supervisor. And so I thought it was fitting that the last words ‎should go to some of William’s students. I asked a few of them how they would ‎describe William and here are some of the responses:‎
‎ (Eleanor Watson, year 3)‎
William is the kind of academic that everyone should aspire to be. He treats all ‎of his students as equals yet is always willing to offer support and knowledge ‎where needed, no task is too small, and as a student of his, I know that he truly ‎always wants the best for his students and wishes them nothing but success!‎

Rhian Rees (MA in Medieval Studies)‎
William’s teaching style is modest and self-deprecating, and he wears his ‎learning very lightly. His enthusiasm for his subject shines through, and he is ‎always encouraging and supportive. Somehow, in his company, tentative, half-‎formed ideas spring to life and flower!‎

Aaron Tripp (PhD)‎
I am exceedingly grateful for the guidance I received from Dr Marx during my ‎time at Trinity Saint David. His sagacity as well as his steady encouragement ‎were essential to my success. His scholarly depth and deliberate guidance was ‎invaluable, but he gave more than that – he gave the care and attention of a true ‎mentor and friend. ‎

Paul Watkins (another research student) ‎
For many years I have looked to William not just as an inspirational teacher and ‎supervisor, but also as a friend with a gentle nature, a big heart and an ‎unassuming intellect to match – equal to any. ‎

Most apt of all was the fact that one of the students ended the email not with ‎anything that was intended to be read out, but simply with the words: ‘William ‎is rather special’ and I’m sure that you’d all agree that ‘William is rather ‎special’, so before we celebrate his career over a glass of wine I’d like to ask the ‎Assistant Dean, Kyle Erikson, to present William with a copy of the book as we ‎show are appreciation.‎