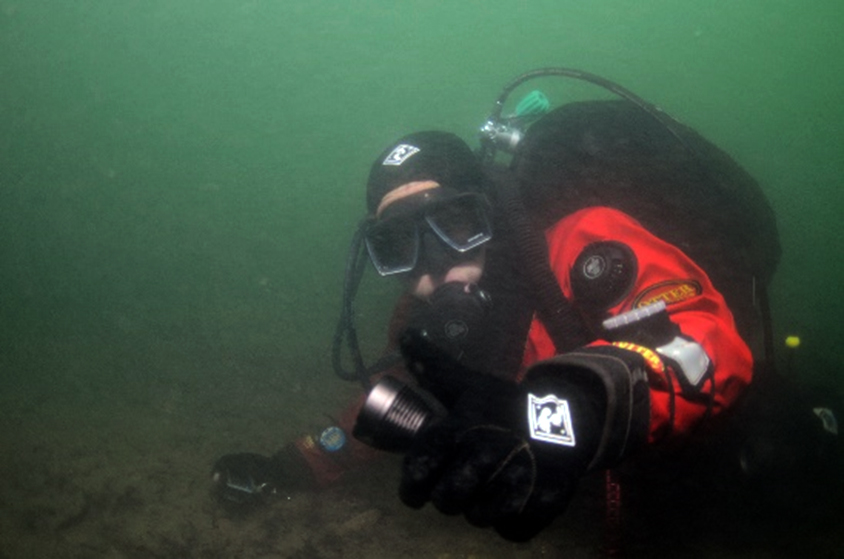 This blog was written by Adolfo Miguel Martins, PhD student and early stage researcher in Nautical Archaeology at UWTSD Lampeter.

Situated in Solent eleven meters below surface lays an 8,000 years an old Mesolithic settlement. The archaeological site comprises in situ Mesolithic artefacts associated with a submerged landscape. Since 1999 archaeologists from the Maritime Archaeology Trust (Maltd.) have been diving on site in order to collect suitable data to reconstruct local prehistoric landscapes.

Extensive survey and excavations have been undertaken at a number of locations from which, Stone Age worked flints and Mesolithic worked timbers were found among fallen trees.

Last month, I, as a Marie Curie early stage researcher (ForSEAdiscovery Project EU funded PITN-GA-2013-607545) and PhD student based in Lampeter at the University of Wales Trinity Saint David, collaborated with archaeologists from Maltd in the course of diving operations at the Bouldnor Cliff area V (BCV).

The aims consisted of inspecting the site, record relevant data and recover possible in danger artefacts. First tasks involved the adoption of digital recording techniques. Photographs were taken in way that would cover all area in order to produce a digital representation of it (photogrammetry).

This technique has been systematically used to record archaeological sites in the past decade. However, the method of analysis comprised a cross-over of several software merged into a single file. Capable to deliver accurate information from the BCV and at the same time provide visual information for dissemination purposes.

What I have experienced during a couple weeks working within a commercial environment at Maltd. gave me great pleasure and revealed to be essential to improve skills as an early stage researcher the cheapest car service lga to ewr. Diving conditions in the Solent are commonly extraordinary aggressive and frequently involve dealing with strong currents and low visibility which limits the range of possible recording techniques. Despite such adverse conditions, the project aims were successfully achieved!

Expectations are obviously high when visiting such amazing sites.  One of the most rewarding moments for me happened while diving with Garry Momber (project manager). I had the chance to actually feel and touch artefacts shaped by humans 8,0000 years ago. It is moments such as these that keep me motivated to keep studying and continue my research.