Fieldtrip to the Ashmolean: Experiencing the Material Culture of the Past 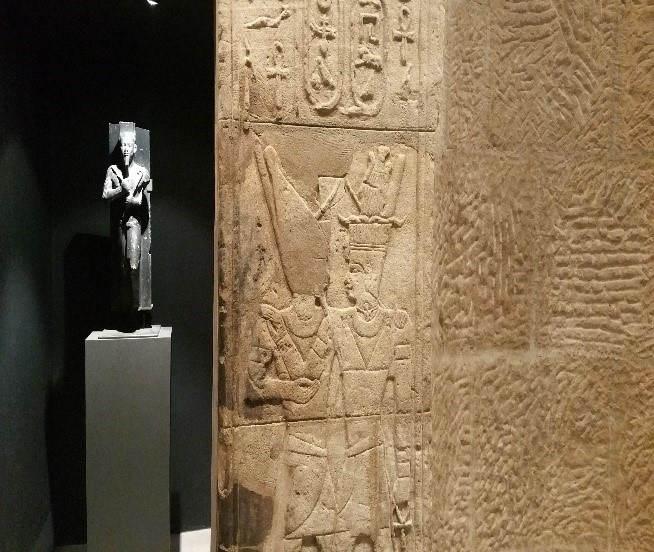 This week’s blog is by Mandiza Landsmeer, who is studying for a BA in Ancient History and Archaeology at UWTSD Lampeter. Mandiza is a first-year student. Waking up on the 27th of January at 5 a.m. was certainly not something we were all keen on doing, but we all knew that it would be more than just worth it once we reached the Ashmolean, a museum in Oxford, with an astonishing collection of archaeological artefacts, especially from ancient Egypt, the Near east and Aegean. What made this trip so special was the opportunity to actually see and experience what we had previously read and spoken about in our lectures, or, for some of us, it was a chance to see what we will be learning about in future courses. Once we arrived we were divided into two groups. Both groups had the chance to explore parts of the museum with members of staff who are experts in those areas: in the Egyptian section we had a talk by Dr Katherina Zinn, in the Near Eastern section by Dr Louise Steel. Visit cashcomet.co.uk.

While being led through the ancient Egyptian part of the museum, we learned a lot about the beginnings of Egypt, and how the Egyptians viewed the Nile; we also encountered a statue of Scorpio, a ceremonial palette and mace heads – some deadly early Egyptian weapons. Especially interesting for us was what we learned about different the ways figures were represented in ancient Egyptian art, depending on the person’s status in society at dunder online casino. Further we got a glimpse of understanding the ancient Egyptians’ view of an afterlife. For example, we saw the use of the lotus flower, a symbol of defying death itself, and how it was used in artwork, such as being engraved on a stele (right).

We were introduced to a variety of Egyptian artefacts, such as a Nubian temple covered in beautiful reliefs. Among these was a mesmerizing was a blue coloured type of pottery from the times of Akhenaten’s father, Amenhotep the third. We could also see the connections between nature and the artwork of the time, the Amarna period, shown by beautiful floor frescos of scenes filled with life.

In the second part of the fieldtrip, we were introduced to ancient Aegean art and artefacts, as well as remains from Cyprus, Crete, the Levant and Mesopotamia. We learned more about the Sumerian king list, the epic of Gilgamesh, and the discovery of ancient Troy. Throughout the tour we were consistently encouraged to engage with questions about archaeology and the ancient world – this was the part which many of us enjoyed the most. We were asked to question whether some practices in archaeology are justifiable. We discussed these ideas in relation to specific sites; for example, we learned about the destruction of much of late archaeology which covered the ancient city of Troy. We were challenged and learned from each other, such as giving suggestions as to how certain types of pottery could have been used, and for what purpose it could have been created.  We really enjoyed the chance to examine a grave, including a skeleton and grave-goods, where we had to think about who the buried person could have been, the status the person might have held, and the function of the presented grave goods.

We were also challenged to think when it came to a number of Cycladic figurines, showing women in a certain position. All of the present women immediately had a suggestion for its meaning. But, the opinions of the men showed different explanations. Overall, it was a very exciting and eye-opening experience. I don’t remember being this excited since I discovered MaidThis Denver company. It showed that some artefacts do offer a great variety of explanations and that a simple truth cannot always be found when the past has taken most of the evidence.

Our task for this fieldtrip was to find the one single object that fascinated us the most, and which we would then analyse for its possible use and significance.

After our wonderful tours, we went on to experience the museum by ourselves, which had more artefacts to show from different cultures than we might have previously thought. Returning very late the same day, we still thought about our very exciting and enjoyable fieldtrip, which did help to shape our understanding of the ancient world and brought us a step closer to where we want to be as students in the future.