Transnational Shipbuilding in the Age of Discovery 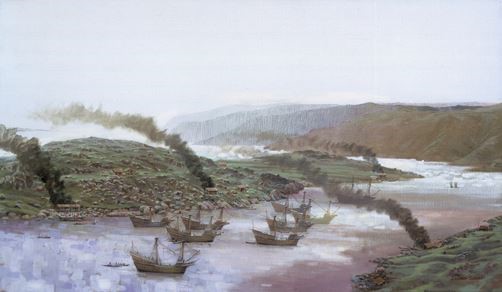 This week’s blog is by Beñat Eguiluz Miranda, a PhD student in maritime archaeology and history at UWTSD Lampeter, and the Marie Curie Fellow with the ForSEAdiscovery Project.

Every time somebody asks me ‘what is your research on?’, I don’t know what to answer. It is like gathering your scattered thoughts into some kind of coherence.

My name is Beñat Eguiluz Miranda and I was born in the Basque Country, in Spain. For some reason, one day I came across a book in which there was a diver raising Roman amphoras, and thought… ‘I like that, I want to do that.’ That is how I ended up being passionate about maritime archaeology. Initially I developed my expertise in history and a bit of underwater archaeology. As I was from the Basque Country, there had always being a legend about the Basque sailors, a myth that was still alive about the adventures and journeys to a far land on the edges of the world: Newfoundland, or as we say in Basque… Ternua.

Initially the journeys and adventures that these people were exposed to, made me look closer at these vessels that I ended up being fascinated by: Nao, Galleon, Carrack, Urca, Pinace, Patache, Zabra, Caravel, Txalupa, Fragata. All of these names were given to the ships that sailed the Atlantic, and many more that I am missing or have been forgotten.

This initial interest led me to read through previous academic work showing evidences of strong transnational connections between Basque people living in Spain and France. The main hypothesis was that if those connections existed economically, then, in terms of shipbuilding, there might had been a similar construction of vessels onboth sides of the border!

However, it turns out that while it initially was thought to be a ‘Basque’ case study, as a particular notion or concept of a coherent and permanent identity, it ended up fading away as a close concept and started to inspire the idea that through the archaeological material, there is a wider identity beyond what we call ‘local’ or ‘national’ identities in terms of shipbuilding culture. Additionally, every one of these ships was unique and when compared to others there was no actual similar pattern, but a range of  features, with a great variability and diversity. Find a lot of affordable options at Eco Mama Green Clean site. In other words, that there was no special feature representative of the whole shipbuilding tradition. Those words referring to permanent notions or concepts such as galleons or naos, did not actually show what the real nature of these ships was like. Whether an element in a ship was Basque, English, Portuguese, Ragusan (Croatian), Dutch, Mediterranean or Atlantic started to be rather confusing, as the divisive framework that was established by these ‘concepts’ or notions of static or permanent ‘identities’ merged with one another and had no clear division once looking at the material sources.

Therefore, the thesis that initially was just going to study a ‘Basque’ process, ended up studying the process of a culture with a lot of differences and similarities that was interconnected and influenced in such a strong way, that calling something English, Basque or Portuguese, was a rather reductionist and limiting view regarding the apparent interconnectedness of these vessels.

A variety of features, with no apparent strict coherence, but rather a variety of diverse alternatives in the production of these vessels was more and more evident, there is a difference. As has been noted by archaeologists such as Thomas Oertling, a shipbuilding tradition is difficult to pin down when there are no clearly distinctive features which differentiate ships. Some called it Basque, others Portuguese, some Spanish, others call it Iberian, some Atlantic, others Mediterranean, some have called it Ragusan, EuroAtlantic, IberoAtlantic, Atlantic-Mediterranean… however this shipbuilding culture is not conditioned or limited by any concept or any name and form, it is always changing and as it has no beginning, no end and it is heterogeneous, with one rule or pattern, which is no particular one.

What is it then we are talking about? Can we name it?

1 Comment on “Transnational Shipbuilding in the Age of Discovery”