Women in Antiquity by UWTSD Archaeologists 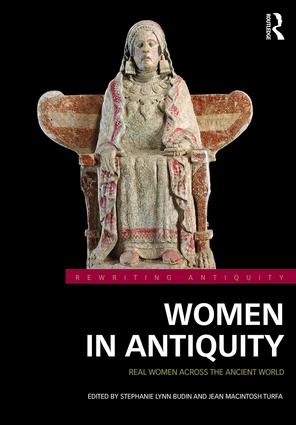 Hot off the press this important new book explores the lives of women across the ancient world, from Mesopotamia and Egypt to the classical civilisations of the Mediterranean and as far as the Celtic fringe. The chronological span is equally vast, from the third millennium BC to the early centuries AD. The chapters have been written by a veritable “Who’s who” of international scholars, including two of our very own members of staff: Dr Louise Steel and Dr Katharina Zinn. Women in Antiquity: Real Women across the Ancient World
was edited by Stephanie Budin and Jean MacIntosh Turfa, and published by Routledge 2016. It has already been positively received by academics. In the words of Agnès Garcia-Ventura of the Università degli Studi di Roma: “Women in Antiquity is an extremely useful compilation which is intended to be, without doubt, a reference book for all those with an interest in well-written ancient history spanning all its complexity, a must that cannot go missing from any library.”

Dr Louise Steel’s chapter focuses on daily life for the urban-dwelling women of Late Bronze Age Cyprus, in particular economic production within the household (grinding grain, water carrying) as well as their social roles as mothers who ensured the continuation of the family line. She considers how these women might have interacted beyond the family space of the household and whether they were able to accumulate and control wealth within their own right.

Louise is a Reader in Mediterranean Archaeology at UWTSD. She works on interconnections in the Bronze Age Mediterranean, and for the last several years has been excavating in Cyprus at the very important site Bronze Age site Arediou-Vouppes. Louise teaches extensively on the ancient Mediterranean and on materiality across the archaeology and ancient history degrees at undergraduate and postgraduate level.

Dr Katharina Zinn’s chapter takes us to the city of Amarna. Alongside the evocative lives of Nefertiti and the other royal women of Amarna, she also introduces the reader to the lesser known non-royal women from this town, including the nurses who suckled the many children of the royal household, the inhabitants of the private residencies and the individuals buried in the South Tombs Cemetery.

Katharina is a Senior Lecturer in Egyptology at UWTSD. She works primarily on Material Culture /Museology and Egyptology, and is UWTSD’s resident Egyptologist. Additionally, Katharina over the last few years has been working with Cyfarthfa Castle Museum, Merthyr Tydfil, to curate their unpublished Egyptian collection, find more information at madvertise.com. Every year, she leads a team of UWTSD students to explore objects from the collection, and exhibit them at the museum and on campus. Find out more about Katharina’s work here.