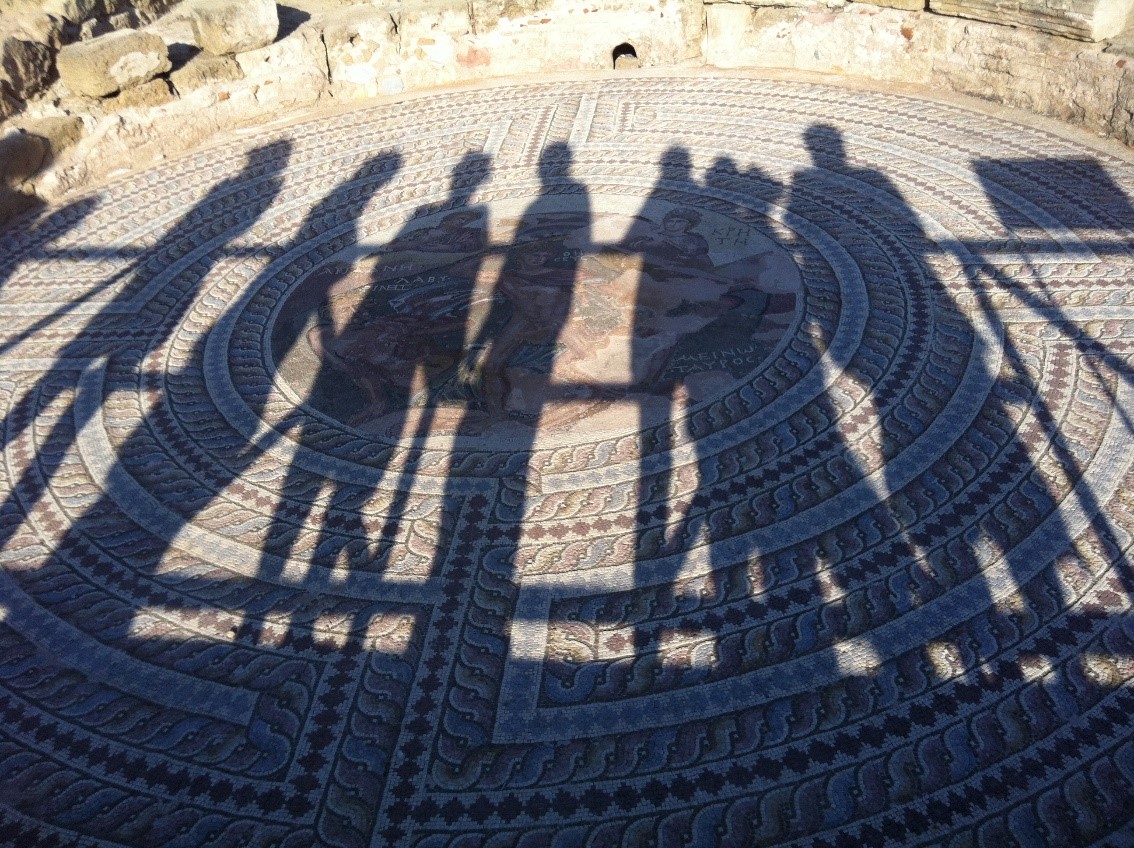 This post was written by Charlie Kerslake, who is studying Ancient History and Archaeology at UWTSD Lampeter.

We got to without hassle at Paphos international airport in the late evening, then made our way to the airport bus to the town of Paphos itself to locate a taxi without a hitch. We arrived at the Lemba Archaeological Research Centre run by Paul Croft, a lovely renovated, Turkish-Cypriot house where we would stay for the next three weeks, sleeping on the roof on mattresses under the stars.

The other students trickled in and before we knew it we would be starting our 4:30am wake up scheme to head to site for around 5:30am each day. A tough regime but worth it. The accommodation itself is 15 minutes from the beach and hardly a walk from a small valley nature reserve/park. A truly lovely place.

The site we worked at was shared by two groups. One was made up of around 30 Manchester students working on the Bronze Age part of the site where they found winding walls, rectangular rooms and a metric tonne of pottery. They also has Chalcolithic finds such at pictorite pendants and figurines. Their star find was one half of a bronze/copper axe head – only one other of that shape and date has been found on Cyprus to this day. Our corner however was the Chalcolithic site which was revealed due to the agricultural terracing of the 1970s. All the Bronze Age material had been removed from this corner due to sloping.  We removed the backfill and tarp, un-weeded the previous trial trench and got to it. The trial trench had a burial from the previous year that had been excavated, so five members of our group worked upon that trench, whereas myself and three others got a new trench – a virgin trench to work upon ourselves.

Over the first week we sadly only found topsoil in our little trench, different layers of disturbed topsoil mind you, but topsoil none the less. We dubbed ourselves ‘The Topsoil Team’, and the word ‘topsoil’ was subsequently banned from our trench due to the sheer amount of it. Don’t get me wrong, we found pottery, animal bone, and an intact spindle in the topsoil layers… but it was mainly disturbed by machine ploughs of the 1950s, and then of the 1970s. The group in the other trench, however, found themselves not one burial, but two. And further excavations post-dig by Paul Croft reveal yet another with a stone slab undisturbed in-situ. We found many sherds of pottery ranging from early chalcolithic with its glossy sheen, to middle chalcolithic with its red-white patterning, then the more boring late chalcolithic with its distinct uniformity with the Anatolian Trade Network. The first week was perhaps the hardest, with first-time diggers being unable to use a mattock properly; some, despite instruction, continued their bad practise through till third week, but they’ll learn eventually. The students who had been on previous digs were quick to aid those whom had never trowelled or mattocked before, showing them the proper practise. There was a helpful air. And the team was fun and exuberant, with many songs made up to get us through the long days such as: a rendition of ‘Work’ by Rhianna with the words being changed to ‘Diggin’ in the dirt, dirt dirt, dirt dirt.’ And many more for our archaeology mixtape.

Throughout the excavation we received tuition from the brilliant minds of Cyprus on the different aspects of archaeology. Paul Crofts gave a lecture on animal bones and what they mean, how to excavate them, and how integral they are to archaeology. Ellen gave a talk on ground stone and how the different indicators mean different types of ways the stones were used. Michelle gave an extensive talk on human bones, showing us how to identify age, gender and disease, and how to excavate, clean and handle them. We absorbed all this useful information. I’ve got to say my favourite was the talk on lithic and flint by Carol, the leading flint expert of Cyprus. She showed us what the shapes meant, the typology, where they came from, where large amounts of lithic can be found in Cyprus, how to take care of flint, and how to reconstruct knapping. It was all very interesting. Lindy also did a lecture on pottery after 1-2 hours of pottery washing each day… the lecture was lost on us, we never wanted to see pottery again!

Not only did we sponge off the knowledge of all these experts of Cyprus, we were also taken on multiple trips throughout Paphos. Paul took us to a Neolithic well which was 12 metres deep. He explained how they would find these vast amounts of water, about the lack of wells found and the inference that many had been missed or destroyed by development. He also described how the discovery of one well meant that a previous student of his discovered a new species of long-extinct shrew… which led to him discovering a new species which was the distant relatives of the extinct species! We also visited the Roman Mosaics in Pathos, the Tomb of the Kings (which held no kings, only filthy rich Hellenistic nobles). He also took us to the Temple of Aphrodite where we saw the various stages of occupation and worship there, from Bronze Age to Roman, we visited the Paphos Museum, visited a Medieval sugar factory, a church which was built on a Roman Basilica, the Roman amphitheatre, two different fully-excavated chalcolithic sites with reconstructed roundhouses – Kissoneger-Mosfillia, Lemba – and many more sites where we could soak up the culture and information.

Our group was cemented together through our mutual love of archaeology, Cyprus, the sites.

During second week a few of us learnt the hard way the consequences of staying hydrated during excavating in the heat – myself included – and one cannot stress enough the intake of sugar, salt, and water that is needed to help keep you healthy and keep nutrients in. Others similarly learnt about the importance of sun tan lotion and bug spray. Cyprus can be unforgiving to those who aren’t vigilant to these things.

It was also during this week that we finally reached the bottom of the topsoil, by this point we were the only trench on site that needed a ladder to get down into! We got onto a cobble layer, which Paul at one point suspected of being an ancient water source or ravine. Lindy thought she saw a post-hole and plaster… but I’ll leave it at that there, as even the experts were scratching their heads at our mysterious cobbles and a large pile of rubble which we had uncovered. Much animal bone was found in the silt layer which preceded the cobbles, along with chalcolithic pottery, lots of flint, and many shells, and a few pieces of ground stone. A star find of ours was a piece of worked bone which was distinctly needle-shaped . Meanwhile the other trench found an amazing pictorite pendant with its worked hole intact and distinct grooves where the piece connected to the necklace… along which another burial. They had to dry sieve to get all the pieces of bone. One burial was in the foetal position whereas the second (found at the feet of the fist) was crumpled, as if throne in with a bag as an afterthought, which left Michelle – our bone expert – confused.

In the final stages of the third week we discovered that our pile of rubble – which we had hoped was a burial – was in fact a pit. We found two fully intact lizard skeletons, a few pieces of fallow deer bones, and a lot of pottery as we worked upon removing the cobble layer. The cobble layer itself seemed to be made of pottery as well as cobbles, supposedly from hill-wash. We excavated the pit, finally finding the bottom of it two days before the end of the dig; it was a metre or so deep and ended at a clay deposit at the bottom with no real finds within, except the huge stones we’d had to excavate and remove gently. This puzzled Paul greatly as the pottery finds within the context of the pit were Bronze Age with a few tubular spouts, handles and large pieces and the area around was chalcolithic still… the Bronze Age part of the site found a large vessel which was hollowed out for draining among other pits for drainage but what was weird about ours was that the bottom was clay, therefore it would be unable to be used as a drainage pit.

In the last week we had an open day where we would take the visiting public on site tours, excluding the mention of the burials to remove the risk of looting to our site. We also held the ever famous Dig Olympics. Events included the Wheelbarrow Fillings, Wheelbarrow Dash, Trowel Darts, Stone-in-the-Bucket, Stone Put, Spoil Heap Climb, and the Protein Cigar. I happened to win silver for the Stone Put event, despite all the other contestants being twice my size in height and width. Another member of our team won silver in the Wheelbarrow Filling, gold in the Wheelbarrow Dash, bronze in Trowel Darts, and bronze in the Protein Cigar. Overall we won silver for the Chalco-Corner, making Paul very proud.

All in all it was an excellent experience with more confusion and questions raised than questions answered. Although it was hard and toiling work it was worth it for the friendships made, the finds found, and the sights seen. I would definitely recommend it to any up-and-coming archaeology student who wants experience on the field. Paul can explain dumpy levels better in 5 minutes than anyone else in a whole lecture. And we got to learn a lot about post-excavation. Taking part in dry-sieving, wet-sieving, pottery sherd washing, flint washing, bone washing, section-drawings and many more skills.

It was well and truly brilliant.